When your pet requires surgery, such as a spay or neuter, you may be more worried about the anesthesia than the actual surgery. While any drugs—anesthetic drugs included—pose some risk for your pet, we can minimize the anesthetic procedures over their lifetime by performing preventive surgical procedures at the time of a spay or neuter. Typically, spay and neuter surgeries are fairly routine, unless there is an anatomic abnormality, and adding another procedure that can prevent future surgery down the road is your pet’s best option. When your furry pal needs spaying or neutering, we may recommend that we perform one of these procedures at the same time.

Pugs, bulldogs, and Boston terriers are all adorable pups, and they share another common trait—their inability to breathe well. Because of their flat-faced anatomy, these breeds often suffer from a condition known as brachycephalic obstructive airway syndrome (BOAS). Surgery is the treatment of choice whenever BOAS is severe enough to restrict breathing, such as:

The earlier these abnormalities are corrected the better, since BOAS worsens over time and may cause other abnormalities. For example, repairing stenotic nares and an elongated soft palate early—at the time of a spay or neuter, for example—can prevent everted laryngeal saccule development.

Entropion can occur in any pet, but is more common in those with wrinkly, saggy skin and eyelids. This condition occurs when the eyelid rolls inward and rubs on your pet’s cornea, which can lead to infection, corneal ulcers, scarring, and vision loss. Entropion is typically a genetic disorder, and may be noticed as early as 6 weeks of age, but can be caused by trauma or disease later in life.

The most effective entropion treatment is surgical repair of the eyelid, which generally means removing a portion of the eyelid. Pets may be diagnosed with entropion at an early age, and temporary corrections may be necessary as they grow, because waiting until they are full grown to correct the condition may result in permanent corneal scarring.

An episioplasty, a surgical correction also known as a vulvoplasty, is used to correct a conformational issue known as a recessed vulva. Dogs with this condition have skin folds that hang over the vulva, trap urine, and often cause dermatitis, vaginitis, or urinary tract infections. These inflammatory conditions and infections can be chronic, recurring problems that do not resolve without an episioplasty. During this surgery, one of our veterinarians will remove a crescent-shaped piece of tissue from above the vulva, lifting the surrounding skin and allowing air to reach, which helps prevent inflammation and infection.

Large- and giant-breed dogs with deep chests commonly fall victim to a condition called gastric dilatation and volvulus (GDV), also known as bloat. This life-threatening condition occurs when the stomach becomes dilated with gas or fluid and twists on itself, preventing the gas or fluid from escaping. Stomach pressure rises, blood flow decreases to the stomach tissues, and the stomach becomes twisted, sometimes including the spleen as it twists. Without treatment, GDV is fatal.

To prevent this condition, we can perform a prophylactic gastropexy, a surgical procedure in which we tack the stomach to the side of the body wall to hold the stomach in place and prevent twisting. We typically perform this procedure when your dog is spayed or neutered, but also as treatment for your dog if they develop GDV. While Great Danes are the breed most recommended for a prophylactic gastropexy, since 40% of Great Danes are estimated to develop GDV in their lifetime, we may recommend the procedure for any large, deep-chested dog who we feel is at risk for this life-threatening condition. 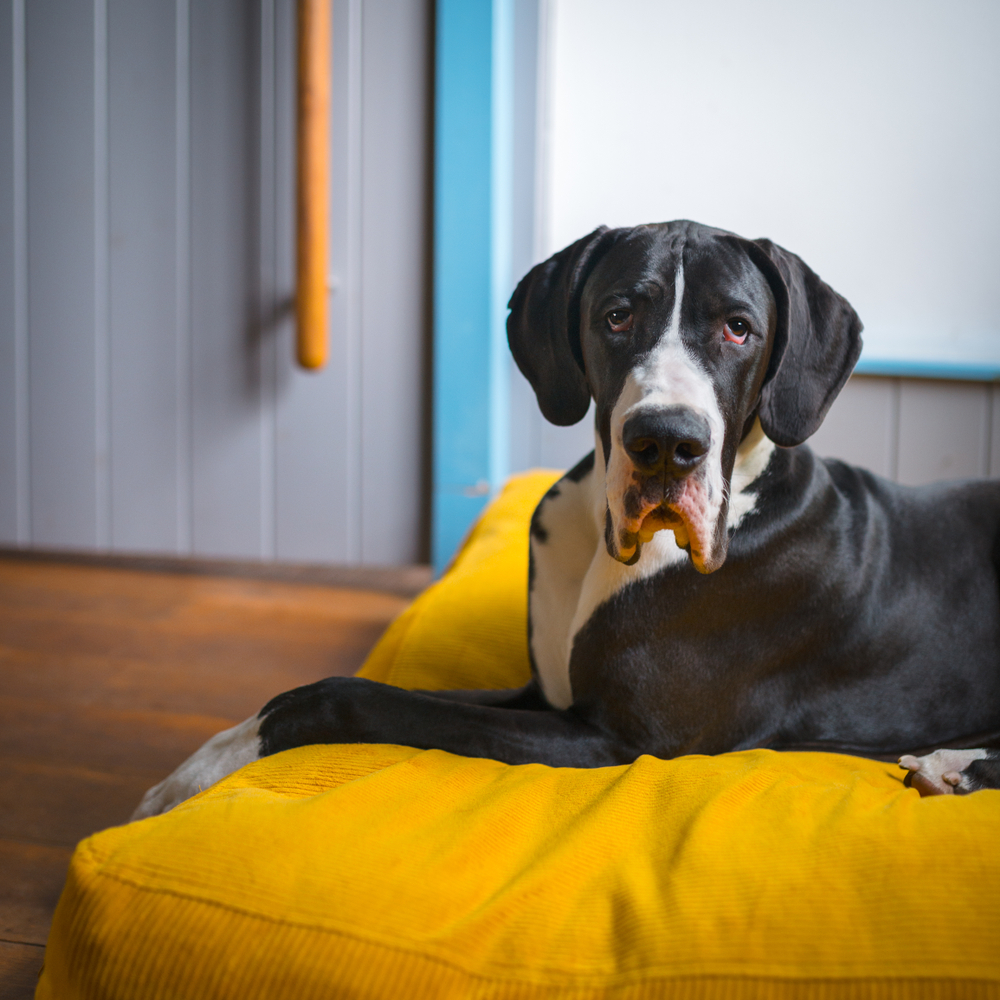 As more studies show that large- and giant-breed dogs should be neutered at a later age, to assist with bone and joint development, your large pet likely will be well-developed elsewhere. Young large dogs can be difficult to keep inactive after neutering, which can cause a scrotal hematoma, where the empty space left behind in the scrotum by removing the fully developed testicles fills with blood. In severe cases, additional surgery is needed to repair the hematoma. With large, active dogs, we may recommend a scrotal ablation at the time of the neuter to prevent a possible scrotal hematoma. During a typical neuter, the testicles are removed while the scrotum is left intact, which rarely causes an issue in small dogs. However, in large dogs, a full-sized, empty scrotum can cause problems immediately after a neuter surgery, so we may recommend removing the scrotum as well (i.e., a scrotal ablation).

Does your furry pal have a condition that may benefit from surgical correction? Schedule a consultation with one of our veterinarians at Country Valley Veterinary Clinic prior to your pet’s spay or neuter, to discuss a potential preventive procedure.